How to have a perfect vacation

Many of us have struggled through the options we had and the wants we gathered over the years and their relation to our pocket. Many of us wanted to see the northern lights in Alaska, or the cherry blossoms in Japan or the coral reef in Australia or just Sweden, even Bruges.

So she went ahead and cancelled the flight that made her lose some money and cancelled the hotel reservation, as well. And as she was going through her days to find a means to fill those vacation days that she had already requested from work, a bulb lit up a little above her head that spelled Log Country Inn. She had known this cute little B&B(Bed&Breakfast) for a long time now and she had wanted to go there as long as she had known this place. But circumstances never seemed to have resolved to point in to that direction until now.

She called in right away and booked the Russian Room for $95/day: 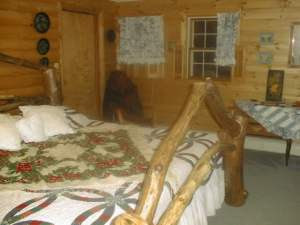 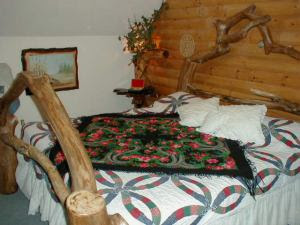 and arranged a super cheap rental car from hotwire. A little tip for yous out there intending to rent a car but seemed discouraged by the rental prices: rent your car through hotwire and chose an airport for your pick-up location. The heroine of our story, moi, as you might have already guessed, lived close by LGA(LaGuardia Airport). So I was able to get to the Hertz in a jiffy. And for $25/day I scored a car that had everything in terms of luxury plus cruise control that was a delight on our 4 hour drive. And yes, Mr. Martin, my PIC(Partner in Crime or Person in Charge, however you want to take it), drove too. NO, let me correct myself, he cruised and it looked good on him.

So, finally the day has arrived, feb 4th, to take on the small road trip. I had gone to Whole Foods to stack up some 'on the road snacks' ranged from brown rice crisps that Martin greatly disliked to crackers, stacy's chip and oranges. I also baked my favorite chocolate chip cookies that somehow lost their initial deliciousness on the second day.

Anyways, we took the 7 train to 74th street stop and Q47 from then on to the Hertz. Once we arrived at Hertz we were delighted to see our car was a bright red chevy with cruise control and a delightful GPS. So we had quite an uneventful ride from NY to Ithaca. We stopped by the town of Ithaca to get ourselves a bit familiar with the surroundings before we head up to the B&B.

When we finally arrived to the B&B, Wanda, our hostess, was not in. We, kind of, let ourselves in and looked around her kitchen where she was going to serve us the most delicious breakfasts for the next consecutive 3 days. But we did not want to trespass into her home anymore than we already did since we did not know so much about the ethics of B&B. So we left a little note to her and head back to the town to Moosewood Restaurant of which have heard so much about while I was asking around to figure out what to do in Ithaca.

If you bother so much to follow the link to Moosewood, you can see why this restaurant was recommended. They are not only vegetarian and super local with their daily changing menus due to uber fresh ingredients but they are also owned by the group of people that actually run the restaurant. I had Pineapple brown rice with vegetables and Martin has Alsasz cheese pie, which he corrected to be a plain quiche Lorraine. And my plate was not that amazing either. It made me think why all these 'healthy' restaurants seem to score on ethics and friendliness and localness and freshness but miss on taste and deliciousness. Even the deserts, chocolate mouse and apple crumble, were underwhelming. But, hey, we are spoiled in New York by Boneshakers that never disappoints, that put the sandwich (sammich as one might say) back on to my "meal options list", that amaze me every time with their very simple yet ever complimentary ingredients that leave my taste buds very joyful.

When we got back, Wanda was waiting for us, very apologetic. But we assured her that it was totally fine and we loved adventures and unpredictable encounters or misencounters in this case. So we walked from the main house to the next one, passing over a small bridge over a small frozen pond, leaving 3 pairs of footmarks on the snow. Oh, did I mention it had snowed the day before? The perfect complimentary to a log cabin is the snow outside and the fire in the fireplace and marshmallows that I was able to find after a long search in the town in forms of peeps at CVS.

She showed us the kitchen, the room, the fireplace and the living room, told us that we would be alone in the house because the other rooms were vacant and left us to enjoy this beautiful log cabin after we agreed on 8 am for the breakfast that she was going to prepare for us.

We first checked our room. It had seemed a bit cold from the pictures on the website. But I assure you, the flash photo did not do right to the place. The room was super cozy, the bed was sooo big that  I was able to maintain my diagonal sleeping pattern without disrupting Martin. It was all wood here and all wood there with cute little cabin windows and matruschkas.

After we settled in a bit and got ourselves acquainted with our room, we went downstairs to start the fire.

Martin, the pyro master I shall call him from now on, was able to get the fire going the old school way. Bow to the sensei. We brought the rocking chairs in front of the fire and chilled. I knitted or tried to watch a movie on Hulu but the internet was not tip top. And by 10 pm we were ready to crash, which we did. One thing stroke me as fascinating is that in the country, when you are far far away from the bright city lights, turning off the light in your room, makes everything pitch black. It was surprising that I was not able differentiate whether it was darker when I closed my eyes or not.

Next day we woke up in a timely manner without the aid of an alarm clock(don't you just love that), took our showers and readied for the breakfast. Wanda had made potato pancakes for us accompanied by some jam, sour cream and some fruit. Very delightful. She told us where to go and what to see around. She mentioned the Ithaca falls and the Taughannock Falls. So the falls we went. First half of our trip I had taken pictures with a camera that did not have film in it. Very typical me. So the pictures I took at the Ithaca Falls are imaginary. But the the pics at the Taughannock Falls are real enough. I thought the latter provided better scenic view anyways(rotate the goose, so it won't burn, a Turkish saying). We took a mile hike under snowy trees and a gorgeous gorge where flowed a river of which we were sure the floor of it, so precise and perfect, was done by German engineering. At the end of the hike we were greeted by the half frozen Taughannock Falls. Beautiful. I will upload the B&W pics as soon as Martin develops and scans them.

After the falls, we did some grocery shopping since we decided to eat in and headed up to the cabin. An other night with great food, and fire in the fireplace and a great company, Mr. Hinze. Oh and no reception up there for the fellow t-mobile users....ehehehe...

Next day we decided to stay in. We had blintzes with Wanda. She told us stories and etc while we were stuffing our faces with her delicious blintzes. I absolutely love her. She is so serene and calm and loving and caring and peaceful. After breakfast we hiked around the land. We walked into the woods. Saw a lot animal tracks on the snow and contemplated and speculated on what and how big the animal that left it and how fresh the tracks were. It was a tiny bit overcast with sun showing its face often enough to put a smile on our face. Took some pictures on our hike and headed back when we had no more trail to follow in the woods. Too short for my taste and Mr.Hinze abode.

We went down to the town to do more grocery shopping for the dinner and check out the farmer's market and finally got back around 2 pm to start our 'in front of the fire' extravaganza. We ended the night by watching some visual stimuli with music in front of the fireplace.

On our last breakfast, Wanda made us some Russian pancakes with some eggs on the side. We talked a bit more. We learned about her life and how she end up having a B&B of which I will not enclose here because I want you to take trip up there and meet her and her 3 cats, peachy, emo and Derek yourself. She also introduced us to her 9 year St. Bernard that acted more like a 2 year old.

After the breakfast, Wanda gave us warm hugs with wishes of seeing us again and we got in our rental red chevy with cruise control and GPS that I love and head back home. If you ask me what have I done in these 4 days, I could only say that I listened to music, knitted, cooked, walked around and chilled.

On our way back we did not get stopped by a single red light. Our trip was like a constant flow. If life is like this, I would not mind living it a bit longer. I have to learn to catch the flow of life. Because I am just realizing now that if you are on the flow, your whole life will feel like our gorgeous Ithaca trip.

As this will go down the history as my longest blog entry so far, I sure wish you had enjoyed reading it, and even able visualize this amazing adventure with me.
Posted by Give Me Your Liver at 7:03 PM No comments: